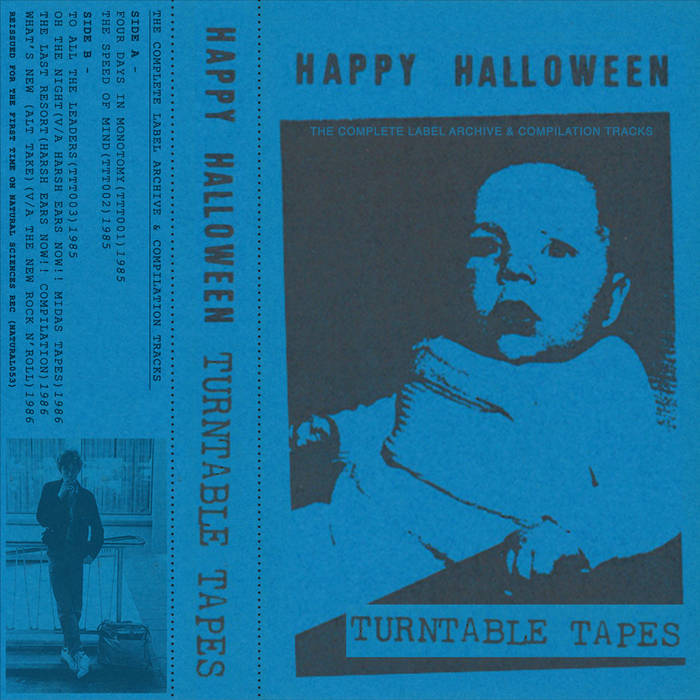 In 1985, from his parents house in the Netherlands, Happy Halloween self-released his own music under the Turntable Tapes banner, putting out three cassettes of punk electronics that were largely given out to friends, neighbours and disgruntled relatives before being discarded into the alley-ways of history.

Recording vocals and instruments onto tape before re-recording back and layering another, his releases on TT are the epitome of the DIY cassette scene, drawing on the sounds of underground radio stations and VHS horror, to create a pure form of teenage disgust from someone who never aspired to be commercial - hell, even liked, by anyone.

Today we're pleased to officially put out his three impossible to find label releases, comp tracks and alternative cuts, which we've pulled together into a single 17-track tape which is limited to 50 copies. The release also includes unseen photos and liner notes. Mad respect to Roel Meelkop for trusting us with his archive.

My musical activities started by listening to pop music. Our home was always filled with pop from the radio, my mother loved it, my father was more of a blues man. When I got a bit older I started to listen to other stuff, mainly synthesizer stuff by Tangerine Dream, Klaus Schulze and of course Kraftwerk. The radio didn’t have that much to offer anymore until I discovered John Peel on the BBC. This opened up a new world of music, raw, temperamental and fresh. I discovered punk and new wave and everything in between and beyond. Of course I identified with the angry and sad sounds from bands like The Cure, Wire, A Certain Ratio, The Fall and later Sonic Youth, Swans and many more. But somehow my preference has mostly gone to UK based bands.

From my 15th year on I tried learning to play guitar and later bass and I actually played in a couple of bands, but somehow that didn’t work so well. Instead I started experimenting with instruments and effect pedals. In that period a Dutch music magazine called ‘Vinyl’ was published and I got it every month. They had a record and cassette review section, which led me to buy vinyl and tapes in the local record shop. Since money was limited, friends would copy and share albums as much as possible.

Releasing tapes ‘officially’ meant nothing else than copying self-made music to self-made tapes. That’s when I decided to release some tapes of my own on my own label, TurnTable Tapes. I got as far as three tapes and then realised that I preferred making music to releasing it. The releases are heavily influenced by my favourite music of that time and filled with teen angst (hindsight, obviously). One of my favourite albums of that time was ‘Learning to cope with cowardice’ by Mark Stewart & The Maffia, produced by Adrian Sherwood. Music and production are extremely well done and in sync, it’s still a favourite of mine. After this I became more interested in industrial music and noise and my music shifted in that direction as well.

I would like to add that the DIY spirit of those cassette days has helped me to become aware of the possibilities of sticking to your own creative principles, even if there is no commercial market for them. It has given me a means of spreading my work (even if on a tiny scale), travelling and getting in touch with likeminded people worldwide and exchanging music and views. And that’s great and it’s also great that it’s still being done.

From Manchester across the global underground.

Assume all communications are tapped.

Bandcamp Daily  your guide to the world of Bandcamp

Cannibal Corpse's George "Corpsegrinder" Fisher stops by for an interview